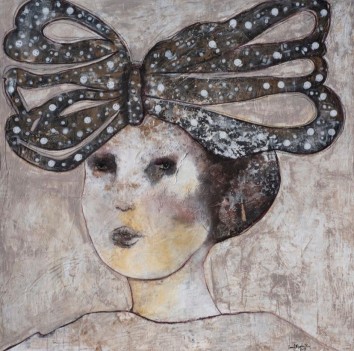 Lives and works in Cairo, Egypt.

She studied philosophy at the Lebanese University in Beirut. She moved to many places to Canada and Egypt also she has many exhibitions in: Paris, Kuwait, Read, Jeddah, Cairo and Argentina. Mardam Bey’s oversized canvases are brimming with undercurrents of emotion; layers of color and intricate details which adorn her subjects, yet it is their eyes that leave you spellbound. Trapped behind hauntingly beautiful irises are tales derived from life. Her palette alternates from one painting to another; through scarlet backgrounds, violet turbans, and orange cloaks – the artist professes her passion for color. Still, she grants each of her subjects a colorfully, melancholic persona. Their plush lips are sealed, fencing in their deepest secrets, while their eyes ratify an ethereal disposition. The artist has seen her subjects a million times before, either lurking around or speeding past her on the streets – and all around her head. It is humankind, which drives this artist’s paint brush. Yet Mardam Bey does not simply produce snapshots of your everyday man and woman – she creates a community of otherworldly creatures, held captive to her use of overpowering colors and entrancing techniques. In this ethereal realm, you are held captive to the subject’s steadfast stare. The artist is not concerned with the exact shape of the eye; but focused on the expression those eyes relay, and the sensation that lies behind the iris.

However, she is not telling a story; she is merely presenting one. And it’s open to interpretation. “I do not seek to impose an idea upon spectators,” the artist tells. “People are free to decide what to see in the eyes of my portraits.” A painting of a boy (or girl, for Mardam Bey sometimes leaves even the gender up to the viewer) his large lips carrying traces of the fiery red background, and a hint of enthusiasm in his captivating eyes, may suggest youthful anticipation. A young woman is painted against an inky-beige background, her glare unwavering, a mauve and violet scarf wrapped elegantly around her head. Her technique is both intense and overwhelmingly powerful. Applying layers of oil paint and mixed media onto the canvas, the artist manages to construct an alternate world, where men and women boast elaborate costumes; pin-striped or polka- dotted, ruffled, or fitted, rendering each painting more dynamic than the next. “Ultimately, it is all about achieving a spontaneous harmony between technique and subject,” she explains, “My technique and subject serves one another.” The artist uses her unique style to give her subjects a life of their own, and the people housed inside her canvas wear that style with flair. Mardam Bey Designs elaborate wardrobes for her subjects. Specks of gold appear on turbans, vests, and draped belts. Purple, pink, and Bordeaux cloaks elegantly embrace three individuals waiting for dinner. A young lady flaunts a puffy orange vest, and a sleek beige skirt. “A human being can be either naked or dressed,” says Mardam Bey. “Since I have decided to dress him, I have the freedom to infuse my own taste onto the wardrobe I paint.” She gives her subjects costumes that are stylish yet undoubtedly peculiar. At times, they do not even make sense. One of her models wears a neat orange turban, a grey dress with red buttons and golden patterns that culminates in a narrow red box. Where do the legs go? Exactly, For Mardam Bey, costume is not a question of form, but rather an excuse to toy with color, which she adores. Her profuse use of turbans and hats reflects her fascination with culture in all its diversity. “For some reason, all cultures feature some sort of hat,” she says.

She was born in Damascus, Syria, studied philosophy and art plastique in Beirut, lived in Montreal, Canada for a few years, and moved to Cairo in 2001. In Egypt, she has encountered a unique blend of cultures, fueling her artistic endeavors.